Sustainable fashion has long had an affinity for natural fibres. They feel better on the skin, have a longer lifespan and can decompose, be composted or recycled. One fabric that ticks all those boxes is linen, a super-fibre whose popularity shows no sign of slowing down.

A favoured material on the sustainable fashion circuit, linen has gained a lot of traction thanks to its Scandi and #cottagecore Instagram aesthetic. But, when it comes to producing any kind of fabric, from polyester to cotton, there’s always some sort of impact during its production process. Read on to discover what made linen so popular in the past and why it plays such a crucial role in today’s sustainability quest. 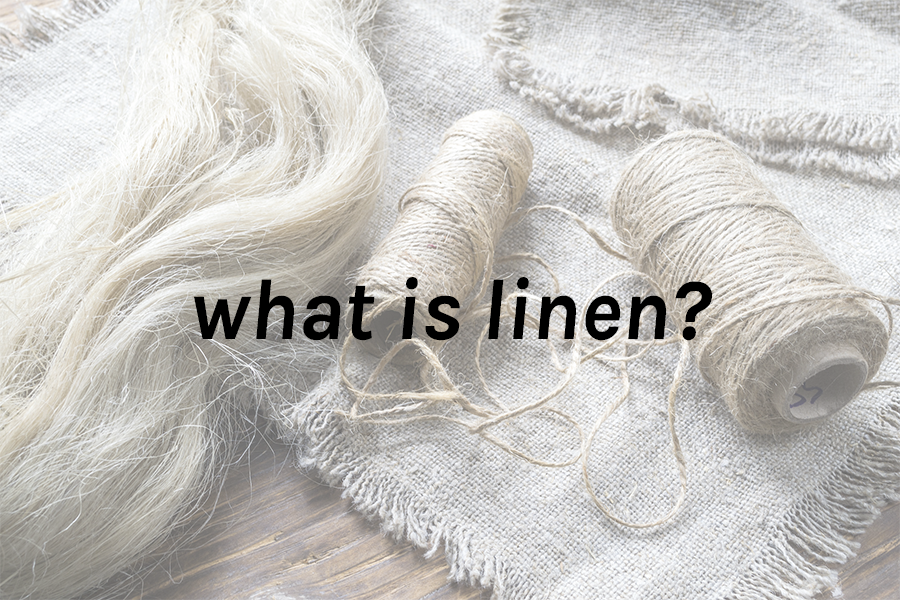 Linen is a woven fabric, with its fibres extruded from the flax plant. The word “linen” comes from the Latin name for flax, Linum usitatissimum. One of the oldest fabrics around, linen is known for its thick, crisp texture. We love linen for its ability to make us feel cool in warm weather while retaining warmth in cooler temperatures. Unlike cotton, linen takes longer to harvest and produce as flax fibres can be difficult to weave. This makes the final product a bit stiffer than cotton. However if you’ve owned any linen garments yourself, you’d know they soften over time and washing. Just like wine, this fabric gets better with age!

Rightfully adored by sustainable fashion and high-quality fabric lovers around, linen’s innumerable uses and plus points can make anyone a #linenlover: 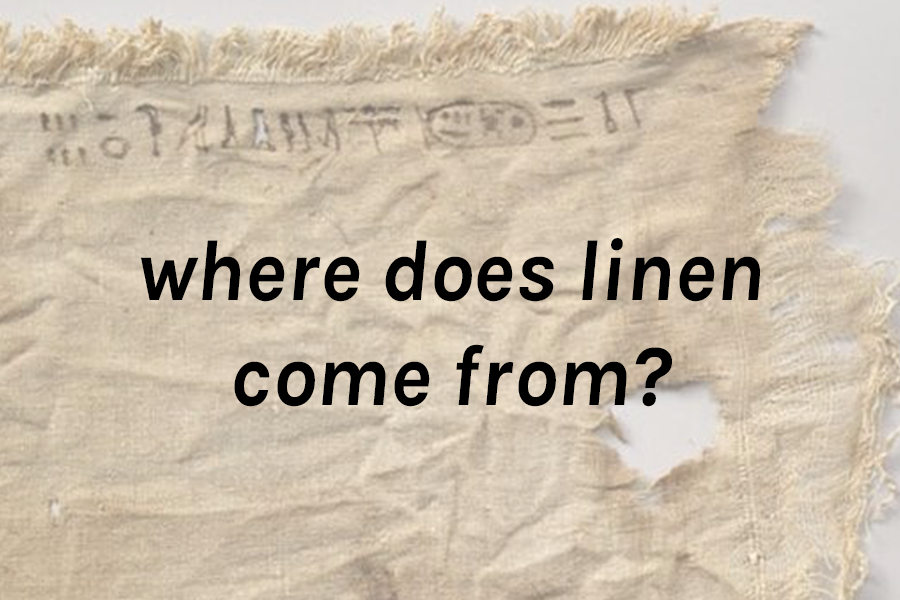 Where does linen come from?

Historically speaking, linen was a preferred fabric because of how easy it was to grow flax — the plant it comes from. In fact, textiles made from flax fibres span as far back as 36,000 years ago when Neolithic people in Europe were still around. Linen’s history extends so far back that it builds its own case as to why it should be used now and in the future too. A common fabric in the history books, linen’s rarity conferred it to dress priests and nobility. Once considered so precious, ancient Egyptians even used linen bandages to wrap the bodies of mummies. This was because linen resists insects and wicks away moisture.

Fun fact: even money is made with linen — it’s blended with cotton to make the sturdy, paper-like substance that’s used to create dollar bills in the US. What’s more, we tend to still refer to towels, cloths, napkins and bedsheets as ‘linens’. This is because it was common to use linen for these household items in the past. While it’s not as mainstream anymore in the home, linen still retains its reputation as luxurious for its high quality and high(er) price due to the labour-intensive processes used to make it.

The blue flower-bearing flax plant flourishes best in cool weather with long days and within moist, well-ploughed soil, making it easy to grow almost anywhere. Europe is famous for producing the finest quality linen fabric — specifically France, Belgium and the Netherlands — where the climate and rich soil provides the best growing conditions for strong, beautiful flax. Even factories in India and China, which produce a lot of linen fabric, buy and process fibres from mostly European flax harvests. 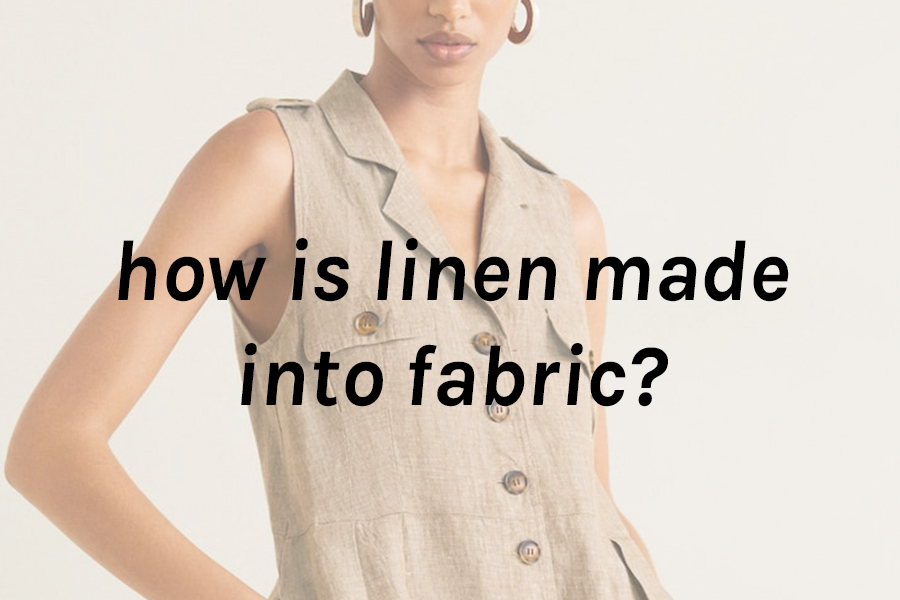 How do you make linen fabric?

The creation of any natural fabric follows a timeline dependent on the crop’s harvest and achievable yield. So it makes sense that when working with plant-derived fibres, there’s always a dimension of unpredictability and inconsistency. Even flax crops, which can grow in 100 days and require less water than cotton, require specific growing conditions.

Farmers can cultivate linen without using fertilisers. An unfussy plant, flax can even grow in soil that tends to be unsuitable for food crops. Flax can even yield a greater amount of fibre than cotton without needing as much water as rainfall tends to be enough for it. However, most flax crops are still treated with herbicides (a form of pesticide used to kill off weeds) which backtracks its environmentally friendly aspects. While flax is relatively easy to grow, the actual separation of flax fibres from the plant’s woody stock is where abundant and inexpensive labour is necessary, especially when manual pulling creates finer linen than using a machine.

Next up in linen’s conventional production cycle is turning raw flax into fibre. In China, they typically do this through a method called water-retting, however, the process pollutes streams with agrochemicals. The method used in Europe — dew and enzyme-retting — has a lower ecological footprint and reduces water pollution.

After the flax has been retted it is combed into thin strands — sometimes as long as 20cm — ready for spinning into yarn. Since linen fibres don’t stretch, they are more prone to breaking during the processing stage. Running machines at slower speeds are necessary to accommodate linen’s nature, which is why the material’s yield is lower, slower and more expensive compared to cotton. 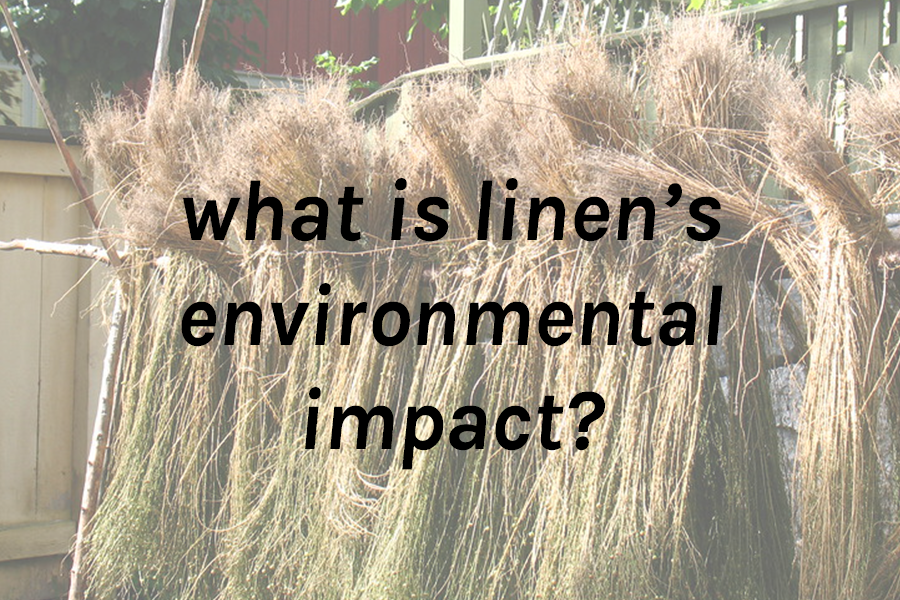 What is linen’s environmental impact?

Although linen ticks all the boxes for a sustainable and closed-loop system, the fabric only constitutes 1% of the world’s fabric consumption. The entire plant can be used in multiple ways, generating zero waste in landfills or otherwise and is cost-effective to do so. And as mentioned before, flax can grow on rough terrain that’s unsuitable for food crops, thus reducing the need to find new land. According to the Flax United Nations Food and Agriculture Organisation, flax also uses 13 times fewer pesticides than potatoes.

However, anything mass-produced has an environmental impact. Linen manufacturers uses alkali and oxalic acids to separate flax fibres from their stems, which harm the surrounding wildlife. Even low concentrations of can be toxic. Due to herbicides, flax cultivation can lead to soil degradation and erosion. If linen has to be dyed or bleached, there’s heavy chemical processes it has to go through to get it to pure white and more to achieve other colours. If you want to be eco-friendly, choose natural linen instead.

Just like the hidden human labour in cotton production, we have a long way to go before we can consider mass textile production to be ethical. Meagre pay and substandard conditions can also deter farmers and workers from taking proper care of the land, thus the need for more land and chemical substances to manage yield.

Despite all this, linen is still one of the least environmentally damaging textiles. It only takes linen a few years to break down into biodegradable molecules which can be reabsorbed by soil. What’s more, linen doesn’t contribute to microplastic pollution like synthetic materials. Linen is also highly durable and can be mended over and over as the Japanese do so with their boro patchwork practice. 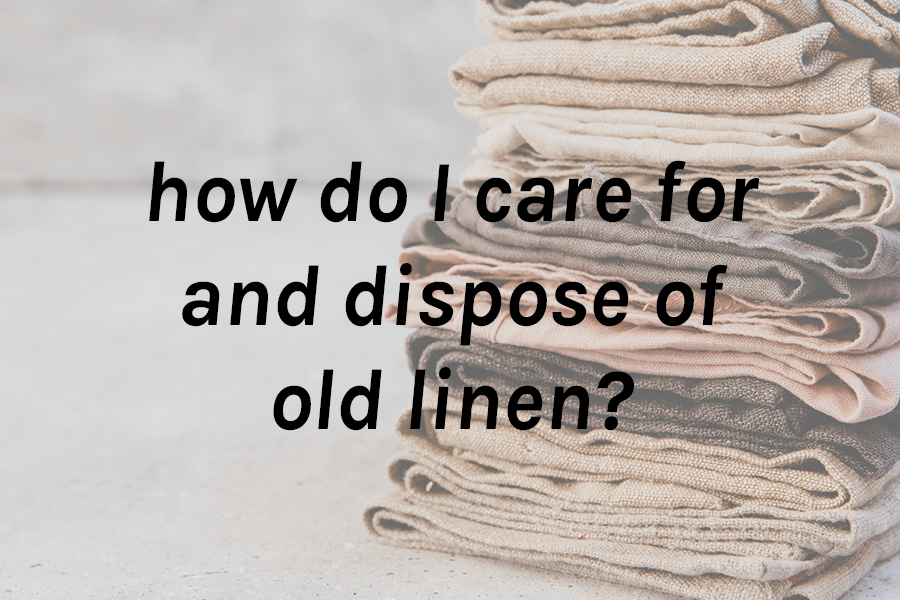 How do I care for linen?

Linen is low maintenance and super easy to care for. It won’t pill and you can wash, dry or steam by hand or machine. Linen can shrink in hot temperatures, however, so stick to using cold or lukewarm water and a mild detergent. Avoid bleach at all costs, even if your white linens are yellowing. Instead, go for an oxidising bleaching agent or a fabric restorer to bring your linens back to its original state.

Dress up! Ethical evening dresses that will turn heads

Linen also air dries well, but you can use a steamer to straighten out any wrinkles. The fabric is surprisingly easier to iron when slightly damp, but skip this step if you’re all about that casual and slouchy look. You won’t have to worry about dust mites as they won’t bother your flax fibres. Just store your linens in a cool, dry place.

While linen clothes can last for decades, consider these alternative ideas if you do need to part ways: 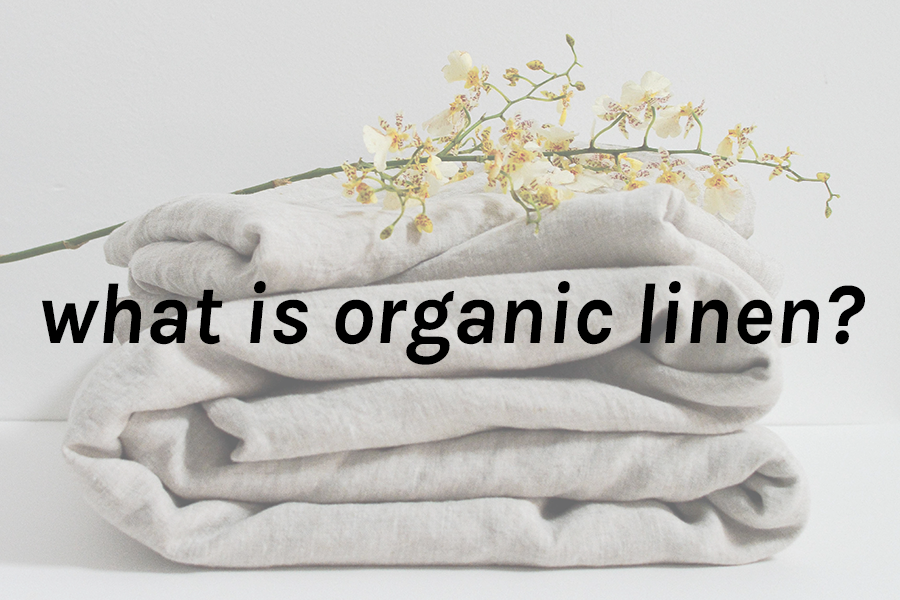 What is organic linen?

Organic linen involves producing fabric sans chemicals or water irrigation. Especially if it is produced using dew-retting, the process is more eco-friendly and makes sure all parts of the plant gets used. Organic linen can be certified by the USDA, the EU’s organic certification programmes and Global Organic Textile Standard (GOTS), as long as these organic agricultural practices are imposed by linen farmers and organisations.

GOTS is the most consumer-recognised and trusted certification. They focus mainly on textile products with stricter organic standards imposed on production methods. OEKO-TEX, another independent organisation that certifies the safety of linen used in consumer applications, doesn’t certify like GOTS but can confirm the lack of toxic substances in end consumer linens. These certifications also ensure fair, discrimination-free labour.

While these processes and certifications mean organic linen tends to be more expensive, you’re paying for fabric that is kinder to your skin, people and planet. 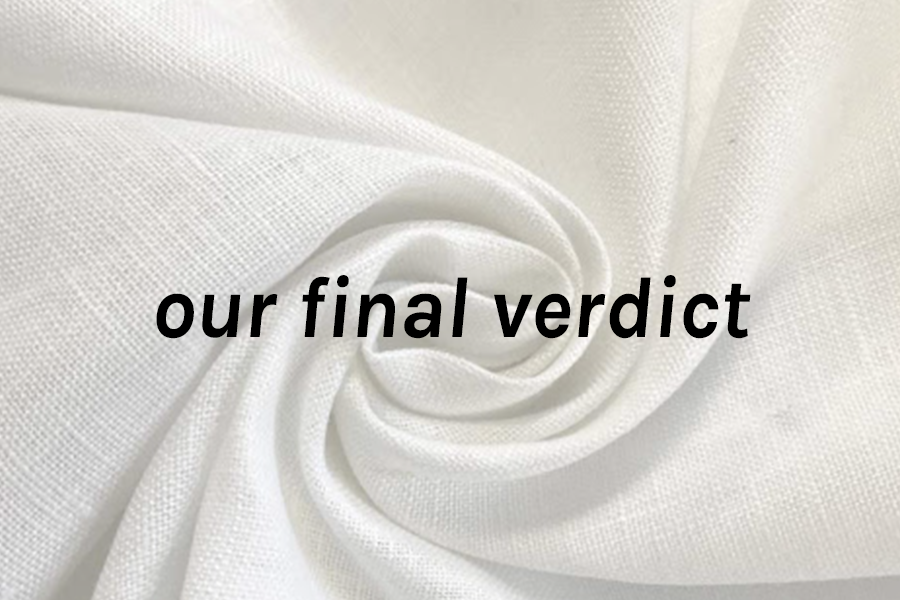 Linen is natural, vegan and has a lower environmental cost than most natural fabrics, cotton included. It’s also versatile, long-lasting and durable, making it a great conscious choice for your wardrobe. Linen is breathable and perfect to wear if you live in hot, humid climates (hello Singapore). Organic linen is even better, especially if it’s certified.

When buying linen, go for clothes made using chemical-free dyes or non-dyed versions instead. Organic linen might require you to part with more cash than cotton or fast fashion versions. Nonetheless, you get great quality and longevity in return.

On the other hand, producing natural fibres like linen can require more water, land, energy, labour and time than synthetics. But the truth is there’s no ‘perfect’ fabric. Your best move? To know the facts about what’s in your clothes beforehand so you can be the best judge!

This guide is part of our What The Fabric! series, a bunch of useful guides that deep dive into the materials we wear every day. For more from the series, go here.

WTF: What The Fabric! Is cotton sustainable?

The Environmental Cost of Free Shipping

Your ultimate guide to sustainable fashion – on any budget

25 sustainable resolutions to inspire you for 2023