This is the future of sustainable materials in fashion

It’s official: plastic is one of the biggest environmental polluters of our time. According to the Ellen MacArthur Foundation, between 5 and 13 million tonnes of the non-biodegradable material leaks into our planet’s oceans each year. If things keep going at our current rate, by 2050 our oceans will contain more of the stubborn stuff by weight than fish. Plastic has even officially entered the fossil records!

Big global campaigns, like those by WWF and Greenpeace, have woken the world up to the plastic crisis. Since then, many of us are trying to do better on our plastic consumption. Swapping out plastic straws for metal or bamboo versions, stashing reusable containers into our handbags and remembering our water bottle is (with a bit of trial and error) becoming part of our daily routines. In recent years, the beauty industry has even moved away from plastic microbeads in cleansers, exfoliants and toothpastes when it was discovered just how much they were polluting our seas.

But one invisible contributor to plastic pollution you’ve likely overlooked? Your clothes. 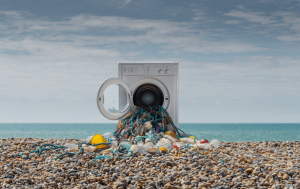 News flash: synthetic fibres in fashion made from fabrics like polyester, nylon and acrylic are all made from plastic elements. Each time you wash them, they release teeny tiny plastic fibres called microplastics. These particles are so small, not longer than five millimetres and with diameters measured in micrometres (1000 micrometres make up a millimetre), they are impossible to detect. Starting from our washing machines, they make their way into local waterways and eventually end up in oceans.

It’s estimated that over a third (35%) of all microplastics released into the world’s oceans are from synthetic textiles. And it’s an issue we can’t continue to ignore. Especially given the fact that since the 1990s, synthetic fibre production has been on the rise.

These minuscule pieces of plastic are the remnant of larger debris. Bottles, straws and also, clothes continually break down into smaller pieces over time. They’re not just dangerous to all the beautiful animals that live in our oceans (many of them mistake them as tiny particles of food), but they’re also harmful to humans; they come back to us through the produce we eat.

“It’s estimated that over a third (35%) of all microplastics released into the world’s oceans are from synthetic textiles.” – UNEP (2016)

Estimates vary, but it’s said that a single load of laundry could release anything up to 700,000 (calculation by Napper & Thompson 2016) of these microscopic plastic fibres. Given the fact that microplastics have been found in the depths of our oceans, in ice in the Arctic and even in our food, this isn’t just a filtration problem but a big fashion problem too. 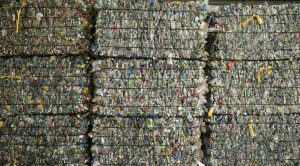 It’s important that the fabrics fashion brands choose to produce with — and the ones we continue to wear and demand — aren’t doing more harm than good. Polyester, one of the most commonly used textiles (and the fabric darling of the fast-fashion industry) is a big contributor to microplastic pollution. However, brands continue to produce with it because it’s cheap, cost-effective and easy to mark up.

And microplastics from our clothes are just a slice of the plastic pollution pie. The fashion industry really needs to address the other forms of plastic it puts out into the world. There’s the packaging our online orders get delivered in, the plastic hangers in stores, the thousands of plastic garment bags being used to transport clothes overseas for photoshoots and fashion weeks. We could go on but, you get the drift. 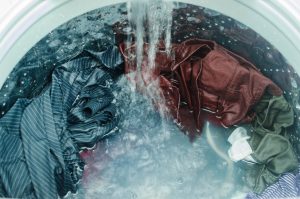 So, what CAN we do about it?

At the moment there’s no perfect fix. While there’s a host of great natural fibre alternatives on the rise, technological advances in fabrics and washing machines are still happening and will take time to become mainstream.

In theory, giving up synthetic fabrics and choosing natural is a good start, but it’s not realistic for everyone. Synthetics are the most affordable (hello Boohoo, ASOS and Missguided). So in comparison, sustainable options seem too expensive. Also, overproducing natural fabrics isn’t the answer either — all fibres have some sort of environmental impact. 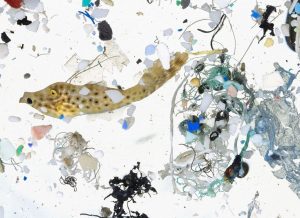 What we can do is be more thoughtful about how we wash our clothes, and there’s now cool companies like Guppyfriend to help us do it. The German company has created a self-cleaning washing bag that filters out even the tiniest microfibres released during our wash. Simply pop your synthetic clothes into a bag, close it up and put it with the rest of your items. Afterwards, you can collect any fibres that have gathered in the bag and recycle them. We’d love to see more brands promoting innovations like Guppyfriend, and educate shoppers about responsible ways to care for clothes.

Research also shows that fabrics woven tighter and with longer fibres shed less over time. That means it’s also the responsibility of fashion brands, current and future, to use and promote more eco-friendly materials. Better textile design is the future.

What’s certain? What we wear matters. And while we wait for innovative solutions, there are small steps we can take to be more thoughtful. Buying less, not buying new polyester and even washing only when needed are just a few small but significant steps towards tackling fashion’s (not so micro) waste problem.

Where is Singapore when it comes to sustainable fashion?

How to set up a sustainable fashion label

The Round Up: Factory Fire, Coronavirus & Fashion News

This is the future of sustainable materials in fashion