Many people think hemp sounds like an unusual choice for clothing fabric – having developed suspicion over the years as a close relative to marijuana. Although it comes from the cannabis plant, there are only tiny amounts of psychoactive properties in this fabric. In short, you can’t get high from wearing hemp! The fibres from this immensely beneficial crop are less psychedelic and more sustainable for many reasons. In fact, generations have revered this fabric for its high tensile strength and durability.

You may be wondering; if hemp is so sustainable then why don’t we see much of it in the market? Read on to find out, but we think it’s high time the fashion industry reveres hemp as the more eco-friendly natural fabric option (pun intended!) 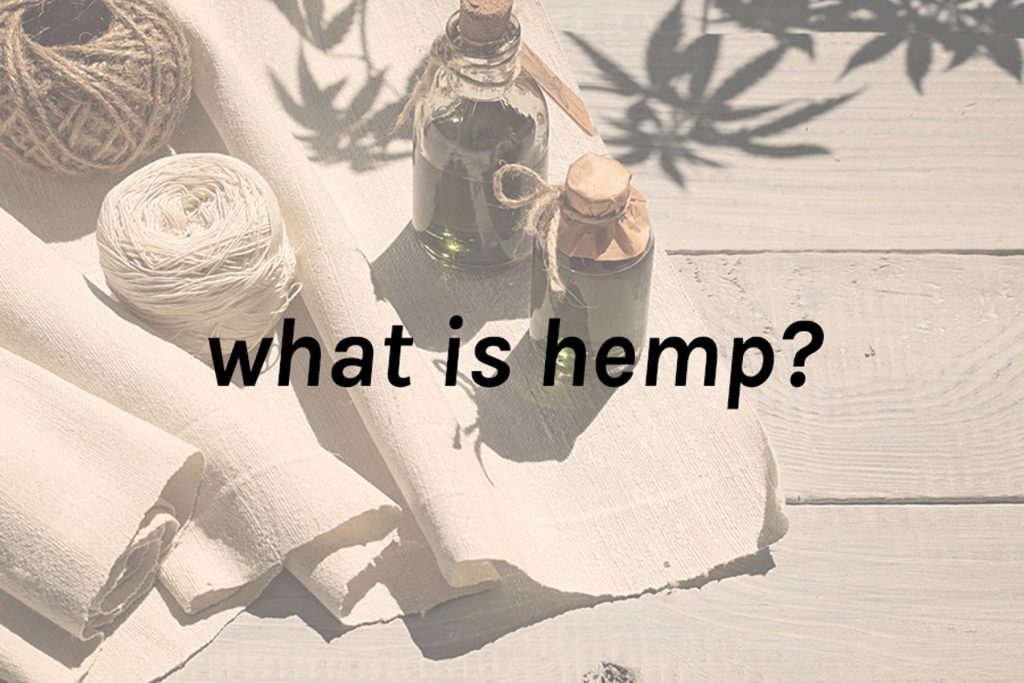 A member of the Cannabis genus of plants (another being marijuana), hemp’s considered as the “sober cousin” at the party. The flowers of the plant where marijuana is extracted from contain the highest levels of the active psychotropic ingredient Tetrahydrocannabinol (THC). Hemp, however, contains low amounts of THC and high amounts of Cannabidiol (CBD). We can then cultivate these by-products for both medicine and textiles.

Another woven natural fabric, hemp actually has a lot of similarities with linen. The most significant of these is its tough and stiff texture which does soften over time but can leave a lot of wrinkles. We can best describe hemp’s texture as a cross between cotton and canvas. What’s more, this plant grows twice as fast as cotton and only needs a third of the water in comparison. The plant also naturally repels insects, so hemp can forgo pesticides and be organically produced by default. Despite this fact, many farmers still use fertilisers and insecticides that degrade soil and spoil the surrounding ecosystem. 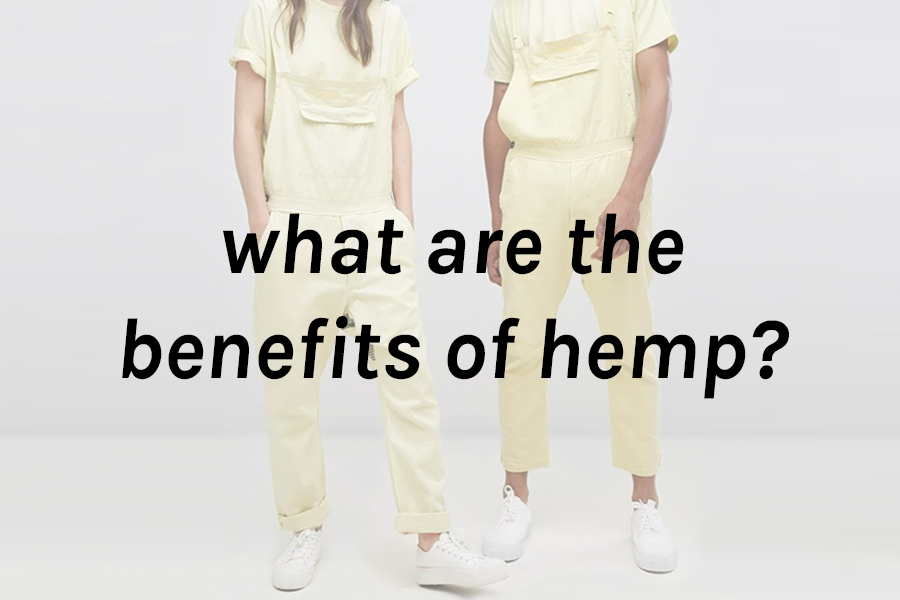 What are the benefits of hemp fabric

Here’s some more of hemp’s natural benefits and uses. 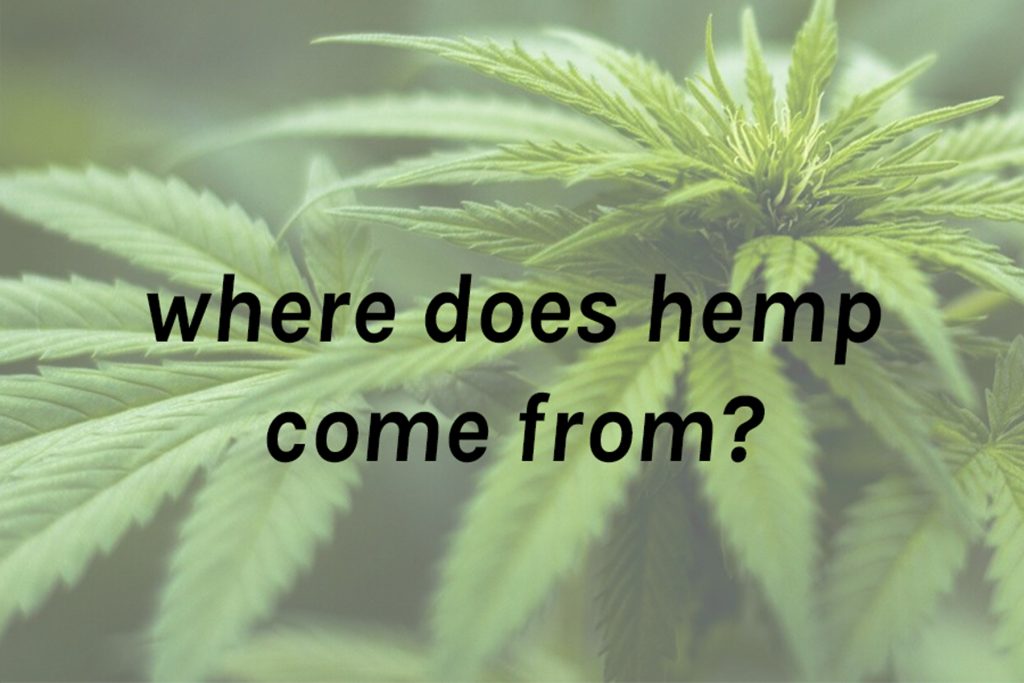 Where does hemp fabric come from?

Hemp has been used and cultivated on almost all the continents for over ten thousand years. The oldest spun hemp cloth was found in Mesopotamia (Iran) dating back to 8000BC. Commonly found in the northern hemisphere, hemp grows best in mountainous regions. China is the leading producer of hemp, producing over 70% of the world’s output, with France ranking second. Over 30 countries, including Chile, Canda, India and Australia, produce industrial hemp. The US outlawed hemp production after WWII due to its association with marijuana. However, with its legality recently reinstated, this could mean big changes for promoting hemp and bringing it to the forefront.

Hemp crops grow really fast, reaching maturity and a height of two to four metres in 100 days or so. Farmers can densely pack the crop into smaller areas to maximise yield. Not only does this mean hemp can be produced organically, but it requires only a fraction of land, labour and water used to make cotton. From stalk, seeds and leaves, the farmers can make total use of the whole plant during harvest. Aside from apparel and textiles, we use this fibre as paper, biofuel, building materials, food, agriculture and medicine. While hemp has been pigeonholed as canvas sacks, sails, rigging, and nets for ships, it’s truly a versatile, multi-purpose fibre. 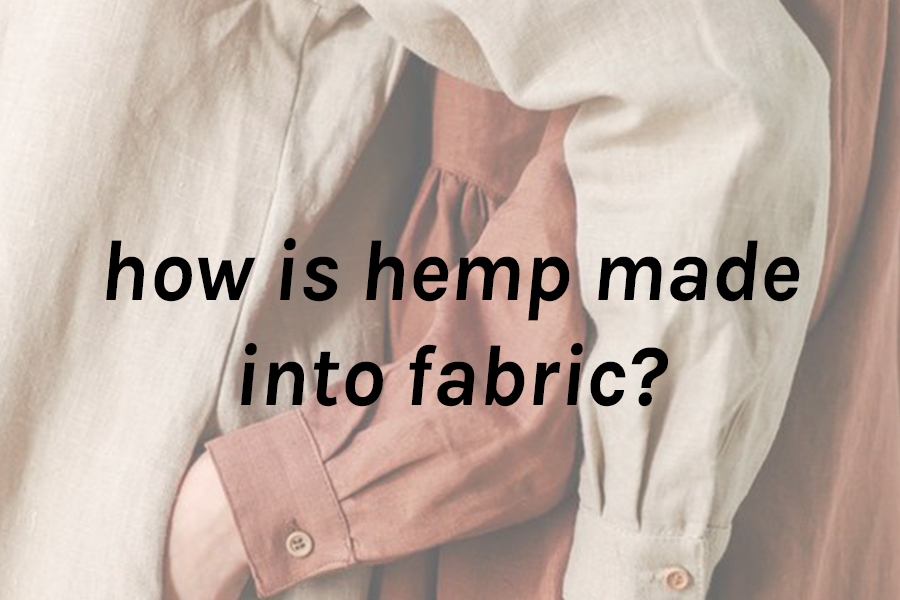 How is hemp made?

Hemp is a type of ‘bast’ fibre, meaning it comes from the stems of plants such as flax, jute and stinging nettle. This means hemp producers need to separate the fibres from the rest of the non-fibrous parts of the plant. For example, lignin is a hard woody biopolymer that is responsible for the scratchy feel of traditional hemp fabric, so farmers will remove it in the process. When the crop is ready to be harvested, the straw is cut when the plants are in full bloom and are shedding pollen.

An interesting fact: many farmers in the UK believe the male hemp plant produces finer and silkier fibres than the female plant, but that female fibres are considerably stronger.

After cutting the crop, farmers then ret, separate and comb the fibres to prepare them into bales. Industrialised hemp production combines these processes to get the fibres ready within minutes of cutting rather than weeks later. Workers then have to remove impurities from the fibres, to spin them without further processing. However, it’s better if hemp undergoes some mechanical or chemical processing to increase its softness and elasticity.

After this, spinning mills can spin these fibres into long continuous threads. At this stage, manufacturers can blend the hemp with other natural fibres to make it even softer while still maintaining durability. Either spun by hand and a spindle or by machine, the yarns are woven into fabric. It can then be dyed, softened, treated and waterproofed. 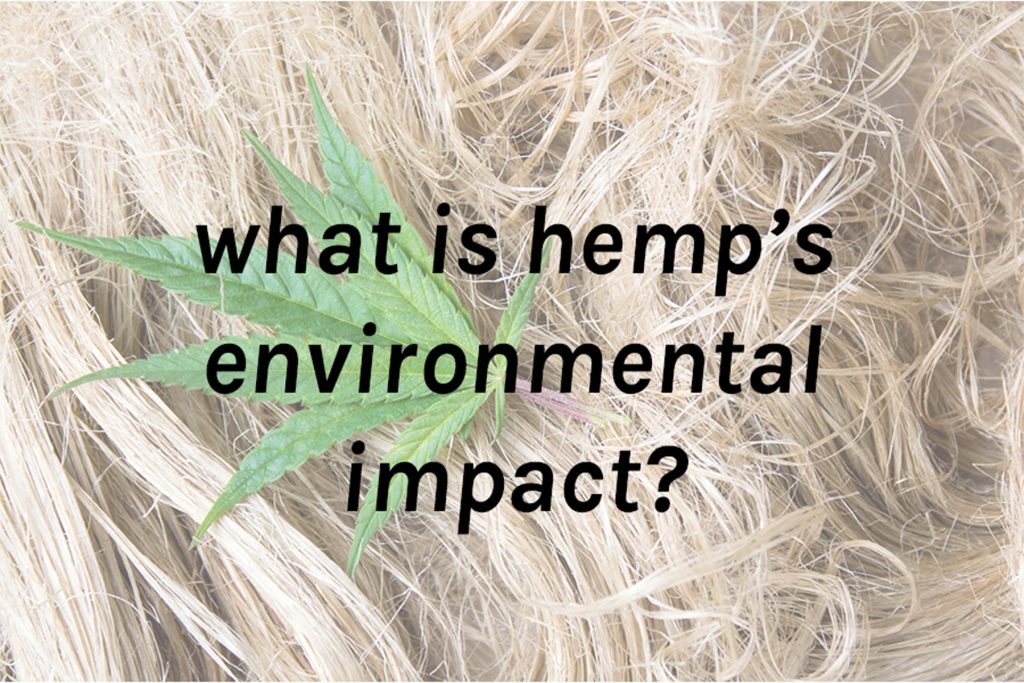 What is hemp’s environmental impact?

While every natural fabric has an impact on the planet, hemp is one of the least environmentally-damaging crops out there. In fact, from when it’s planted to how it’s disposed of, this plant does more good than bad. Did you know hemp was planted in the contaminated fields near the Chernobyl nuclear disaster site in the 90s?  This was an experiment to test hemp’s ability to accumulate heavy metals from the soil, in a process called phytoremediation. This proves hemp is ideal for environmental cleanup, as it replenishes and decontaminates depleted soils and potentially landfills too. Hemp also has low carbon emissions and is capable of capturing carbon from the atmosphere.

Hemp farmers don’t require virtually any pesticides, can produce it cheaply and use up all parts of the plant. This all-rounded crop’s seeds, fibres and leaves can even produce bushy biomass – traditionally considered as waste – and be used as medicine and energy sources to replace fossil fuels. However, it is important to note that all industrially cultivated crops require water irrigation for higher yields. And unless farmers grow hemp in a region that gets 20-30 inches of rain per year, it will get thirsty. Also, large industrial processed hemp will deplete the soil of key fertilising compounds like nitrogen, phosphorus and potassium. This can lead to soil erosion as with other industrial crops.

We are still discovering hemp’s possibilities the more popular it becomes as a fabric. And, it might be what the future of sustainable fashion needs – a multi-purpose fibre that leaves the planet better than it found it – as long as it is grown and treated in the right conditions. 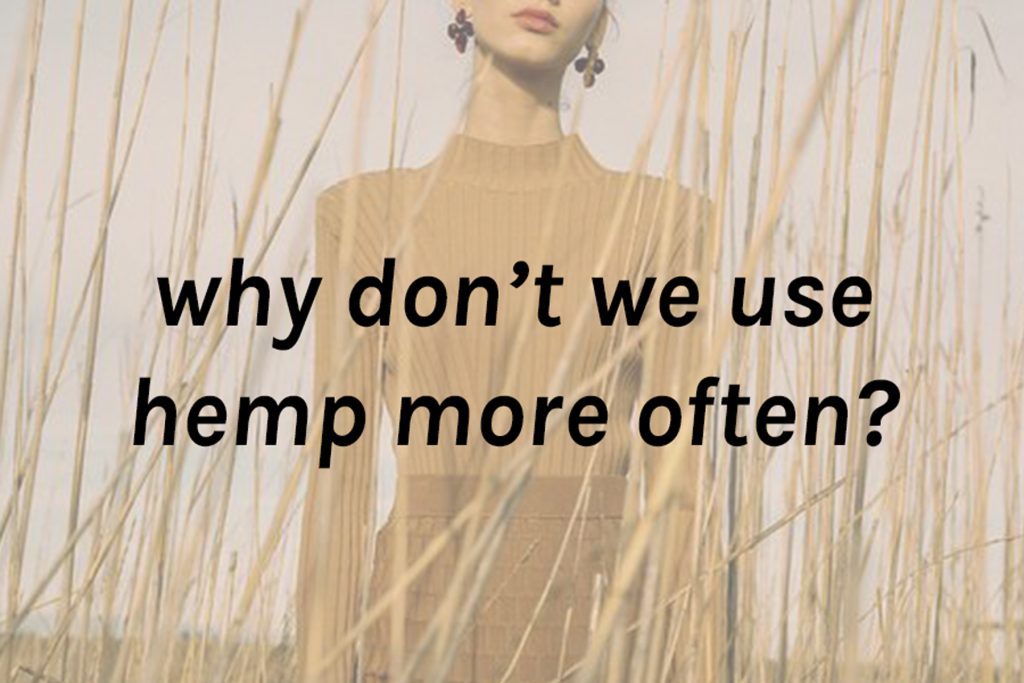 If hemp is so great, why don’t we use it more?

Unfortunately, hemp’s lack of popularity has more to do with its association with marijuana than any environmental reasons. Virtually impossible to tell apart, these two cannabis crops were considered controlled substances in the US until 2018. Although hemp did play an important role in North America, cotton reigned supreme for many reasons. With the mechanical cotton gin and growing demand for the light-weight fabric, hemp couldn’t compete as it was still very labour intensive and costly to produce. Coupling (il)legality with low demand, hemp was not on anyone’s radar until the 1980’s when new industrial mechanised processes made the fabric softer and cheaper.

However, the general consensus about hemp was still not very perky and customer awareness became ever more important. There has never been enough marketing done around hemp’s environmental benefits by larger fashion houses. Most importantly, Instagram, Twitter and Facebook’s banned brands from advertising cannabis-related products. But as bigger names like Levi’s and Eileen Fisher incorporate this hardy fibre into their collections we’re seeing the tides shift in hemp’s favour.

What’s more, pure hemp fabric has a distinctive odour and isn’t white, to begin with. This means it has to go through various bleaching cycles to become a crisp white which is then dyed. Either way, as more emerging ethical brands, include hemp, the key messaging of its environmental superiority to cotton is crucial for consumers to get friendly with hemp. 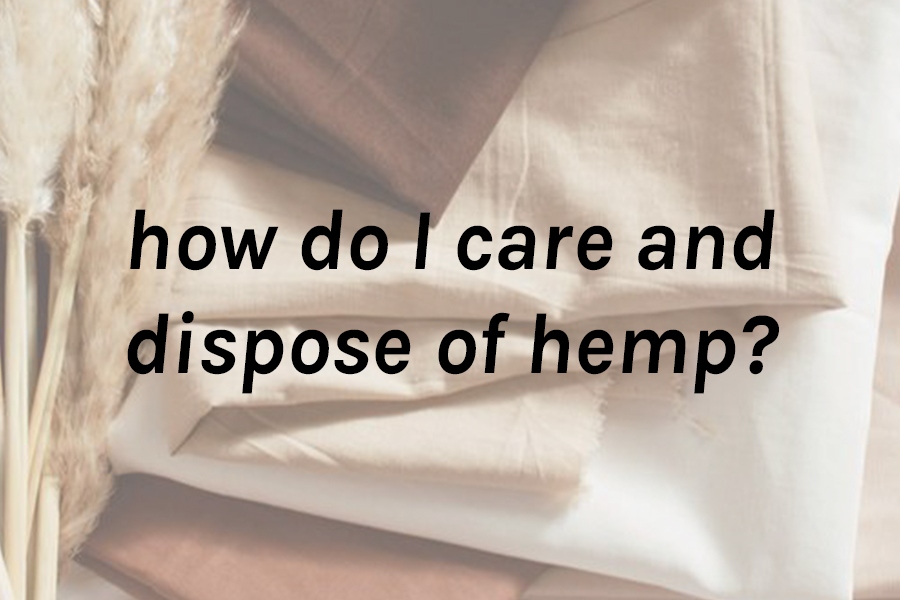 Hemp, just like linen, is easy to care for and requires minimal attention. Wash it by hand in cool water with a natural detergent and use white vinegar to remove any unpleasant odours. Avoid using any chlorine bleaches for tough stains; instead, opt for oxygen bleach or hydrogen peroxide. This fabric shouldn’t need dry cleaning, hot washing or tumble-drying – line drying under the sun works perfectly well. You can even try rolling your clothes in a towel if line-drying is not an option. Hemp absorbs and retains dye well even after wash, so colours shouldn’t run off the fabric. Although not as vibrant as synthetically dyeing, dyeing naturally and in earth tones serves its purpose well. It does wrinkle, however, so steam iron your clothes to remove creasing while it’s still slightly damp.

When it’s time to part ways with your hardy hemp, turn to more natural ways instead of the garbage bin. Like all natural fabrics (that we did not chemically treat and dye), this one is also biodegradable and decomposes within weeks or a month. But before you throw it in the compost bin, you might want to check if your clothes are 100% hemp or blended with cotton or synthetic fibres with a burn test. If there is no melting residue and it smells of burning leaves, wood or paper, it’s safe to compost. After burning, if there is dark smoke, beading residue and a strong synthetic smell, it’s best to upcycle the garment or pass it on to a recycling plant instead. If you’re into DIY, hemp makes great bags and shoes too! 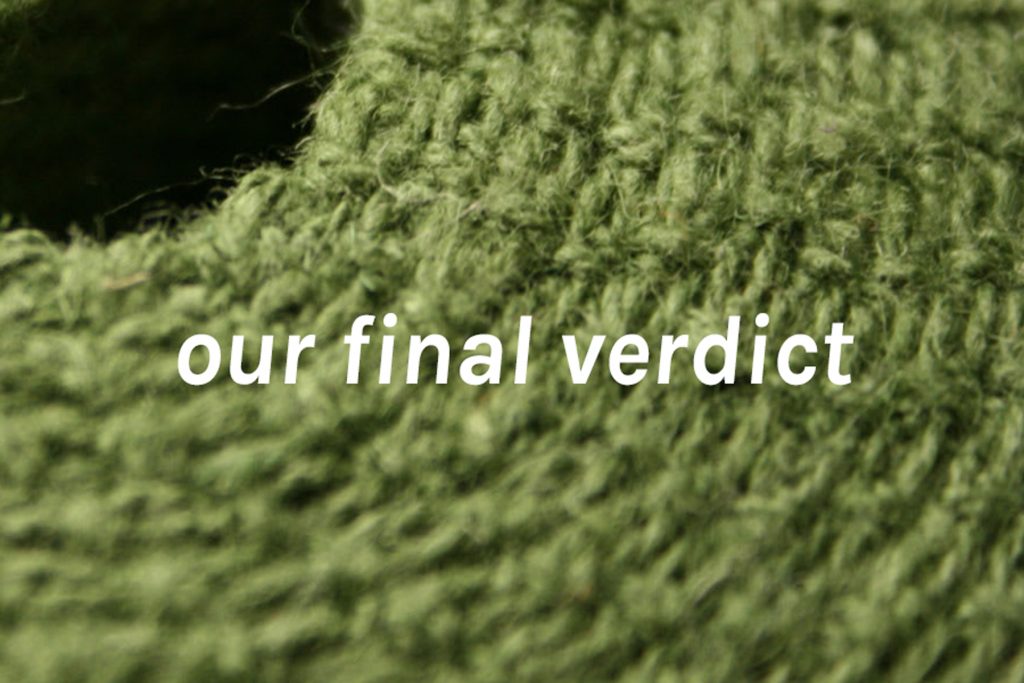 The slow and sustainable fashion movement places a big emphasis on natural fabrics. And rightfully so — natural fibres are breathable, don’t release microplastics, and when produced organically, they are better for the environment. However, all fabrics have an impact, even natural ones, especially when produced on larger, industrialised scale. While we’re not siding with any fabric, all the evidence points to hemp being one of the most eco-friendly fabrics out there!

A low-impact crop, it requires no insecticides and even returns 60-70% of nutrients back to the soil for future harvests. And since these fibres are so strong, you could do well to get your hands on some vintage hemp too. This is a great option if you’re not particular about the rough texture, as it will be softer than its virgin produced counterpart. Otherwise, look out for cotton or silk mixes for softer textures.

This guide is part of our What The Fabric! Series, create guides that deep dive into the materials we wear every day. For more from the series, go here.

WTF: What The Fabric! Is cotton sustainable?

The Round Up: Future of fashion shows, canceling toxic dyes & linen fabric guide